The Spartan 300: The Greatest Badasses in History

Most bad-asses will be lucky to have their exploits remembered a year after their deaths. Some will be very lucky to be a foot note in a history book 50 years after the last shovel full of earth is dropped on their grave. It is a rare few who are remembered for centuries, and fewer still for millennia.

For near two and a half thousand years, the last stand of Leonidas and his 300 Spartans has served as a striking lesson in testicular fortitude and sheer bad-assery. Few enough battles have stood the test of time to remain relevant to the best warriors of each nation and generation; the battle at Thermopylae is as vital a lesson in war and the warrior spirit in the halls of West Point and Annapolis as it was in the education of Roman generals.

When the self-proclaimed living god, King Xerxes, began his march to the West with a million men at his command- ok, there’s actually a lot of debate about the size of his army, but we’re just going to call it a million and tell the scholars to shove it- little did he consider the tiny nation of Sparta. A kingdom said to be home to the progeny of Heracles himself, Sparta produced the finest soldiers of the day through measures one might now consider the stuff of comic books and science fiction.

The cultivation of super soldiers began at birth. Shortly after popping out, Spartan babies were appraised by the community and if found weak or in some way deficient would be abandoned in the mountains. At age 7, military education began for boys and girls- the idea being that athletic, well educated women produce stronger children. At 13 boys were divided into units and sent into the wilderness to fend for themselves and train. At 20, men were assigned to their final military units and continued to train throughout life. No man of Sparta could be involved in trade or manufacture, and technically ownership of gold and silver was prohibited; the only real profession of a Spartan man was war.

It is said that when any nation of Greece requested military aid from Sparta, Sparta would send just one soldier. One Spartan is all it ever took.

In 480 BC the vast armies of the Persian Empire, led by Xerxes I, began their trek towards Greece intent upon conquest. Xerxes sent out emissaries to the various states of Greece demanding tribute of earth and water as a symbol of submission; many smaller states capitulated in fear of Xerxes hordes. In Sparta, the emissaries of Persia were cast into a well and told to “dig it out for [themselves]”.

Outnumbered, the Greeks who stood their ground, the states of Sparta, Athens, and Thespia to name a few, knew that they must choose wisely where to make their stand. The Athenians placed led the allied Greek navy at the choke point of Artemision while King Leonidas of Sparta led a ground force of some 5,000 Greeks under a vanguard of 300 Spartans to Thermopylae. Known as the Hot Gates or the Gates of Fire, Thermopylae provided the perfect bottle-neck in which to strip the advantage of Xerxes’ numbers. 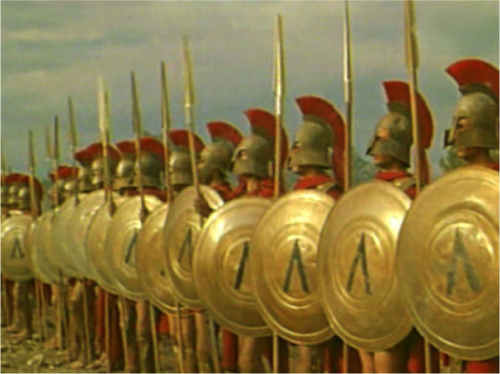 Before Departing for Thermopylae, the Greeks consulted the Oracle at Delphi. The Oracle prophesied that either a king of Sparta would die or his country would die. Leonidas assembled 300 Spartan citizens, soldiers by definition, into an “all sire” unit; every man who marched to Thermopylae left a son in Sparta to carry on his name. Doomed by prophecy, the 300 said good-bye to their wives who told them all “with your shield or upon your shield”, the point being that a man returning home without his shield obviously threw it down in order to run away faster- something no Spartan woman could forgive. When Gorgo, wife and queen to Leonidas, asked her husband what she should do when he left, he told her to “marry a good man, and have good children”.

No Spartan that marched to Thermopylae harbored any illusions of returning home. All they could hope to do was clog the gears of the Persian war machine and halt its advance long enough for the Greek forces behind them to reorganize and field a larger army.

And that is exactly what they did. 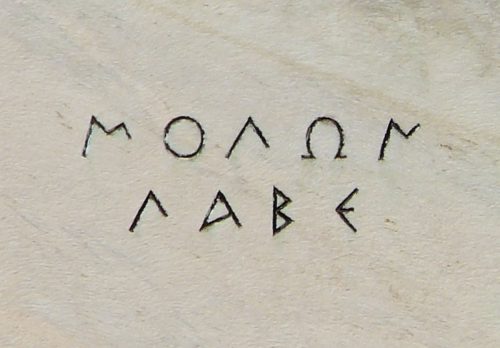 The Greeks arrived at the Hot Gates well in advance of Xerxes’ forces. When the Persian army finally approached, Xerxes sent out another emissary and this time offered Leonidas the kingship of all Greece. Leonidas flatly refused, responding:

If you knew what is good in life, you would abstain from wishing for foreign things. For me it is better to die for Greece than to be monarch over my compatriots

The response enraged Xerxes who then demanded that the Spartans surrender their arms.

“Come and take them”, was the Spartan king’s laconic reply.

As the Persian armies amassed and arrayed before the Greeks in the pass, one man remarked that the Persian arrows would be so numerous as to blot out the sun. Dienekes, a Spartan warrior, quipped, “so much the better, we shall fight in the shade”.

On the 5th day of one truly epic stare-down, Xerxes attacked. Sending in his Medes troops first, troops only recently conquered and absorbed into the Persian empire, Xerxes sat atop his gilded throne to watch one of the bloodiest fights in human history.

The pass at Thermopylae was narrow enough that the Greek phalanx stretched from one cliff face to the other. The phalanx stoud as a solid wall of shields and spears into which the Persian troops were poured, poured like spare animal parts into the meat grinder at a hot dog factory. The Medes troops Xerxes committed to this first assault numbered 10,000, the Spartans and their allies tore them apart.

Xerxes, notably shocked by the failure of the Medes to inflict damage on the Greek lines, pulled back what little remained of his pressed soldier and sent in the cream of his crop, the Immortals. The Immortals were so named in that their number was never permitted to go above or below ten thousand; if any Immortal were killed or incapacitated he was immediately replaced within the unit to ensure that the number always stood at ten thousand. Suffice it to say, after their confrontation with the Greeks, the Immortals found themselves with many new members over the next few days.

Better suited to the desert warfare of the Middle East, Immortals were armed with leather and wicker shields, a short spear, bow & arrows, dagger, and short sword, they wore only light armor at best- a tiara was standard issue. The Immortal was simply no match for the efficient, well armored stabbing machine that was the Greek phalanx and its hoplites. In contrast, the Spartans and their allies wore plate armor including helmets with full cheek plating, carried heavy wooden and metal shields, and fought with heavy, long spears taller than the average man. Many Immortals died horribly well before their puny weapons could even reach their Spartan enemies, their shields and armor providing no protection. 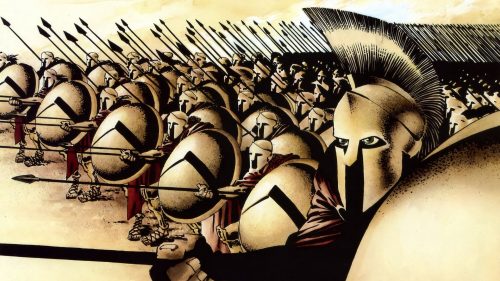 As shown in Frank Miller’s 300, this is what the Immortals marched into.

The Immortals charged and broke on the Greek lines just as easily as the Medes did. By the end of the first day, the mountains of dead clogging the narrow pass at Thermopylea stood as a testament to the Greeks’ ability to kill. By the second day, Persian troops had to crawl over piles of dead bodies higher than any man and slide down the other side and become a part of it; with the whips of their masters at their backs, the Persian troops had no choice but to march, climb, and crawl forward and die.

Late in the second day, Xerxes, at a loss for how to break the Greek lines, was presented with the opportunity he needed. A Greek named Ephialtes offered to show the Persian troops a narrow pass through the mountains by which they could come up behind the Greek lines.

Today in Greece, Ephialtes is synonymous with traitor.

Leonidas, realizing his troops were now surrounded on top of outnumbered ordered the majority of his forces to withdraw so that the Greeks could rally elsewhere. Standing in the pass were the 300 Spartans, 700 Thespians, and 400 Thebans. Surrounded, the Spartans abandoned their narrow pass and advanced on the Immortals in order to kill as many of the enemy as they could. The Spartans fought until every spear had broken and resorted to their short swords. In the fighting two of Xerxes’ brothers were killed along with Leonidas himself. The Spartans fought for possession of Leonidas’ corpse and won it, for a time. By the end, Spartans were fighting hand to hand. Further back by the Greek encampment, the Thespians also bravely stood their ground, but succumbed to withering arrow fire, the Thebans however surrendered.

Modern estimates based on archaeology and primary sources put the Greek losses at 1,500: 300 Spartans, 700 Thespians, & 500 Greeks of the other various states. By contrast, even the most conservative numbers put Persian casualties at 20,000 men dead some go as high as 80,000. Every Greek that died at Thermopylae took more than ten Persians with him.

Xerxes, enraged by his incredible losses, had Leonidas’ corpse beheaded and crucified. The remains were returned to Sparta 40 years later and were interred with all honors. The bodies of the Greeks were buried there in the mountains and at the pass where they fought a stone monument was erected baring this famous inscription:

Go tell the Spartans, stranger passing by,
that here, obedient to their laws, we lie 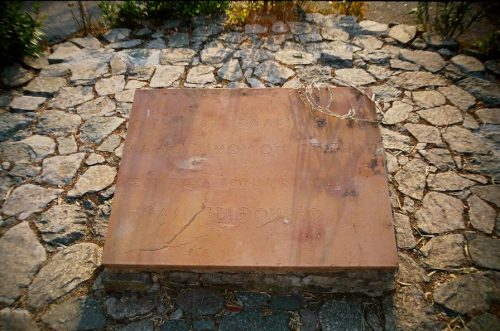 For the month of February, Bullshido acknowledges the bad-asses without peer that fought at Thermopylae, Leonidas and the 300 Spartans.

It is adviced that every carrier of a Y-chromosome march his ass to theaters this March for a lesson in bad-assery; the film adaptation of Frank Miller’s 300 hits screens March 9 in the US. Those who do not attend do not deserve a penis.

This post originally appeared on the Bullshido Forums, by Stick. You can reply, or read the comments and discussion here.