This could be the single greatest call-out of bullshido in modern history.

Many people who follow both Martial Arts and international politics are familiar with two bits of Vladimir Putin trivia:

Both of which are things that Putin and his followers point to in an effort to promote the Russian dictator’s image of being a tough guy. Both of which are of dubious usefulness in that regard, to anyone who actually knows about Martial Arts. Although, we will give the Judo black belt a bit more credit, since earning it in most cases requires full-contact sparring (“randori”) and competition.

That last bit is the crux of the argument. According to Benjamin Wittes, editor of the national security blog “Lawfare” and Taekwondo black belt, there’s no real evidence of Putin demonstrating any actual prowess in the style. In 2015, Wittes published a post that was essentially a “come at me, bro” to the Russian leader, which he recently re-tweeted in an effort to renew the challenge:

I don’t pretend to have seen all of Putin’s martial arts videos, but I’ve watched a bunch of them, and they seem to follow a similar pattern: they involve some shots of Putin and others doing warm-ups, and then they involve a sequence of short clips, in each of which Putin throws someone who is prepared to take the throw; then there are warm handshakes and photo ops. At least in the videos I have seen, there are no committed attacks on Putin, and I see no evidence that his opponents are ever trying to get the better of him. The videos are demonstrations in which he shows off his masculine prowess with them taking what the Japanese call ukemi (defensive falls) for him. 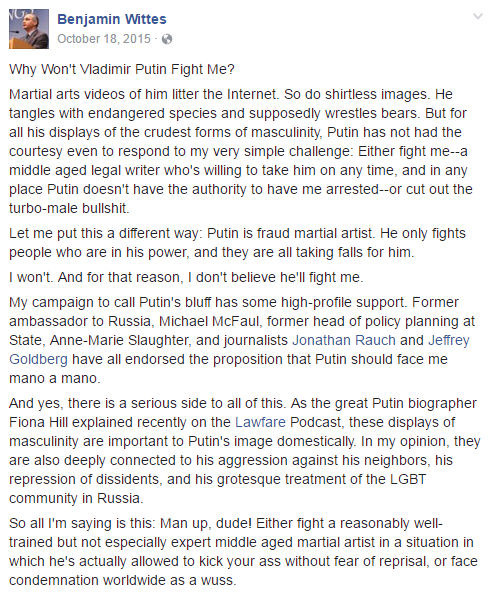 Wittes’ challenge has remained open for two years and counting, and he states unequivocally that “it is not a joke”. Obviously there’s little incentive for Putin to respond, given his position and the potential risk to the tough guy image he, and essentially the entire Russian media have created for him, should he lose. But with the insanity in politics we’ve seen this past year, who knows, maybe there’s a chance.

And maybe Wittes will catch an accidentally lethal dose of Polonium.

“Putin needs either to fight this reasonably well-trained but not especially expert middle-aged desk worker in a situation in which I’m actually allowed to win without fear of reprisal, or he should face condemnation worldwide as a wuss and a phony,” he wrote. “A truly strong leader doesn’t need to stage displays using lackeys subject to his power.

Either way Ben, you’ve got balls of steel. Too bad steel is susceptible to radioactivity.