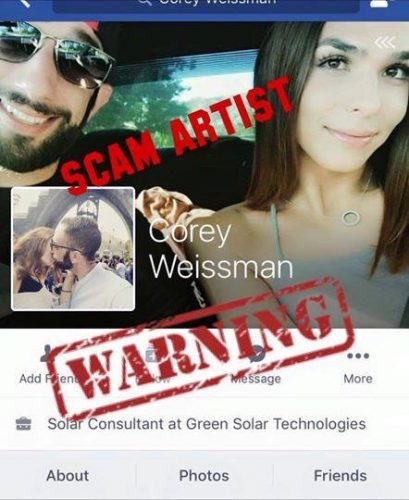 Who is Corey Weissman? A Tae Kwon Do practitioner that turned to BJJ and worked his way up to Purple Belt, training at the Hayastan MMA academy (according to his social media, no other information on how long or if he actually did train there) before quitting after getting injured. Currently he is an employee at Green Solar Technologies.

How did he become the subject of a Bullshido article? The Brazilian Jiu Jitsu gear culture, as it is, has spawned numerous secondary markets for exclusive gear not dissimilar to the sneaker subculture. This includes Gis, Hoodies, and Rashguards from brands like Shoyoroll. Gear in these communities can go for 2x-3x the original purchase price. Mr. Weissman used these communities to net at least a $2500 profit via 20-30 interactions.

What was the scam? Mr. Weissman was able to obtain several highly sort after limited edition items. He would private message active members of the Shoyoroll Trade or Sell group offering to sell. Once the funds were transferred he would not send the item and instead re-sell it to another member over a separate private message. Therefore, he would get paid multiple times for the same item that was never sent. The key to this scam was the extensive use of PayPal Friends and Family services. Mr. Weissman would ask for the funds to be send via PayPal Friends and Family so the buyer would incur the 3% fee. This also means it’s not a goods and services purchase and not subject to same protections.

How was he caught? Eventually Mr. Weissman slipped up sending an offering of the same rare item to 2 friends who were very confused on how they both bought the same rare item from the same seller. At this point a group chat started with other people that haven’t received their items and finally posted on Facebook where even more people admitted to being scammed and never receiving their item.

What is the current situation? It looks like Mr. Weissman has returned several people’s money but only a small fraction of the people that reported to being scammed has been refunded. At least 1 person won their case with PayPal and recovered their $115. Currently, members of the group are working with PayPal, additionally criminal reports were filed with the FBI and Simi Valley PD.

Thank you to the Facebook Shoyoroll Trade Or Sell group for compiling the information for Bullshido.

Previous articlePsychic Who Was Hit By Car Inside a Restaurant Didn’t See it Coming
Next articleWTF? World Taekwondo Federation to Change Name Because… Internet

Is the "mind" separate from the body? It certainly doesn't feel like that when you get KTFO. However...