Everything that Went Wrong With Weidman v Mousasi at UFC 210

The co-main event of UFC 210 featured a bout between the two most memetic middleweights on the roster- “The” Chris “The All American” Weidman versus Gegard “Moose-sassy” “Musashi” Mousasi. Weidman used the forward pressure and well-timed takedowns he’s known for to distance himself in the first stanza, but an unshaken Mousasi proved difficult to hold in one spot and, by the second opening bell, The All American seemed prematurely drained by the effort. Mousasi inflicted some damage from the outside early in the second frame and tried a takedown of his own to put a button on the performance. Weidman reversed and ended up as the man on top then Mousasi reversed again and got back to his feet in what is colloquially known as a fucking fight.

Leaning on top of Weidman, the Moose let loose with two knees to the head that were, in the moment, questionably legal. What followed was the greatest number of layers of error I have ever seen in a single bad call in any professional bout. So, with a great hindsight view from the comfort of my warm armchair, below is a detailed list of the four separate mistakes that went wrong with the finish of Weidman v. Mousasi:

Knowing that knees to his face were imminent, Weidman reached to the ground with both hands to capitalize on the new definition of a grounded opponent (one with four points touching the floor), so as to make a knee to his head illegal. Mousasi responded by lifting Weidman’s shoulders to peel his hands off the ground just before throwing each of two knees. Both of these knees skirted the line between what is legal under the new sets of rules. A replay would later reveal that both knees were perfectly legit. But, believe it or not, that should not have mattered during the fight.

Referee Dan Miragliotta judged the second knee to be illegal and responded appropriately by calling a timeout, sending Mousasi to a neutral corner and having Weidman examined by ringside doctors to determine if the illegal blow would force the bout to stop.

Mistake number one- the fact that the knee was legal but Miragliotta judged it illegal- is actually both minor and understandable, on its own. The shot was legal, but was a fence-rider and easily could have appeared to be a foul from the referee’s perspective. What should have happened was that the ringside doctor should have immediately conducted the examination and made a determination as to whether Weidman could continue. If he could, the fight resets and goes on with no point deduction. If he could not, the fight is a no contest due to accidental foul. The referee is, by the rules, the final authority on all matters inside the octagon. Even if a blow isn’t actually illegal, the second a referee says its a foul, the blow has to be treated as a foul. There is no replay in New York. Which brings us to mistakes two and three, where things start to get really messy. 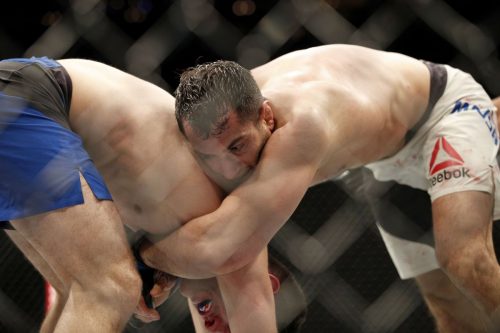 Mistake two actually contributed most to the cluster fuck, even though it seems smaller than three. An illegal blow only gets five minutes if it is a groin shot. Every other illegal blow is to be examined by the ringside doctor, immediately, and the call made by the doctor is to be acted upon as soon as the determination is made. The five minute rule, where the fighter gets up to five minutes and then uses his own judgment if he wants to continue, only applies to groin shots because an athlete can’t drop trow and get his down-unders examined live on Pay-Per-View. The fact that officials seemingly started to give Weidman five minutes and then called the doctor in led directly to both mistake three and the final error.

With some extra time on their hands due to mistake two, the officials and commentators all repeatedly announced that, in New York, a replay is not allowed to be consulted in a live referee call- a controversial rule whose primary justification is that overturning a referee call in the middle of a bout, even if the call was bad, can cause confusion and lead to further regulatory errors.

Then, everyone from the officials to the commentators proceeded to consult the fucking replay. The replay revealed that the original call was bad and it was overturned in the middle of the bout, resulting in confusion and leading to further regulatory errors.*

*Note: Allowing replays is now more common than not in most states. Until last night, I didn’t really have a good argument for why there should be a no-replay rule. But, here we are.

Now, Weidman, under the impression that the knee was illegal, was gaming the rules to give him as long a break as possible to recover from being kneed in the face. This is some common gamesmanship and, had he known that the knee would be judged legal, I have no doubt Weidman would have at least made a much greater attempt to power through.

Instead the doctors, who took their sweet time getting to Weidman, changed the standards by which they were judging him, mid-examination, from the knee being a foul to being a legal blow. So, Weidman’s perfectly normal behavior of trying to get a few seconds added to the break due to an illegal blow suddenly became tacit admission that he was not able to intelligently defend himself. Weidman, not even aware that the call was overturned because it fucking can’t be overturned according to the rules, looked on in stunned silence as he lost by TKO after the fact- the fourth and final error.

What we saw last night was just the simple fact that the Empire State, the last one to the MMA party, is also the furthest behind the regulatory learning curve. And with that, I just torpedoed my idea to do some side work as a judge.

Is "doxing" ever okay? It is when we do it! Of course, that's exactly what literally everyone thinks—from the cheese puff-encrusted incel to the head of investigations for a grass roots consumer protection organization (ours).