Can’t Unsee: How Racism In Politics Colored My View of the Welterweight Title

I’ve been out of the sports writing game for a little over two years now- having made the Faustian bargain called “adulthood” where I spend so much energy at work that I can’t dedicate myself to the things I really enjoy in exchange for owning property and objects to post on Instagram for others to envy: hashtag lifestyleblog hashtag livingthedream.

However, I did make an agreement with the proprietor of this fine website to write about “the most interesting thing to happen at the next national event.” Cue the single most interesting fight week and event I can remember- UFC 209.

*Note: Being broke is terrible and I would never go back there. If at all possible, please do not follow your dreams.

Fuck me, right? How do you pick? Lando Vannata and David Teymur put on an early fight of the year contender. Khabib was forced to pull out of the most anticipated bout on the card due to health issues after some insane political intrigue with his corner to trying to travel to the US. Darren Elkins staged a comeback so tough that his middle name is now “Motherfucking” and then Dan Kelly showed a similar amount of inner steel two hours later. The two top welterweights in the world fought to what could easily have been their second five-round draw in a row. A drunken Michael Bisping and Eddie Bravo engaged in a thirty minute, heated debate on the Fermi Paradox in what I can only consider evidence that there is a god and we share a sense of humor. I have not even mentioned GSP coming out of retirement, yet.

So, the obvious route to go is the social issue that every fight fan loves to be lectured about- racism.

On paper, I had every reason to root for Stephen “Wonderboy” Thompson in his rematch for the 170 pound crown against Tyron Woodley. I find Thompson’s fighting style more entertaining. I have a soft spot for southpaws. He has been known to train with some local folks and, as such, has ties to my community. He staged a rather fantastic comeback against Woodley in their first bout to get the draw, and everyone loves a comeback. 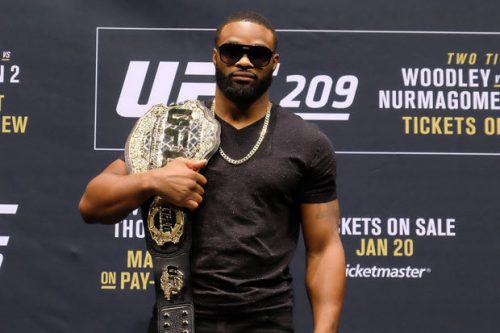 But, I found myself hoping Woodley would take this for one reason: He is arguably the most disrespected champion since Frankie Edgar took the lightweight strap from B.J. Penn. (Remember this specific comparison, it will become important in a minute).

Tyron Woodley got the belt he has around his waist by knocking one of baddest men on the planet out cold in the first round, yet no love for him was to be found. UFC Fight Pass’ advertising team used the fact that Woodley, their fucking champion, took a knockout loss back in Strikeforce to hype up an aging commodity in Nate Marquardt. Woodley started talking about money fights being the most important thing to him, a tactic that has endeared many fans to Conor McGregor, and Woodley was accused of ducking Thompson. Woodley intimated that the fans might not like him because of racism and the fans respond that they don’t like him because he thinks fans are racist for not liking him. In the court of public opinion, T-Wood can not  seem to win. 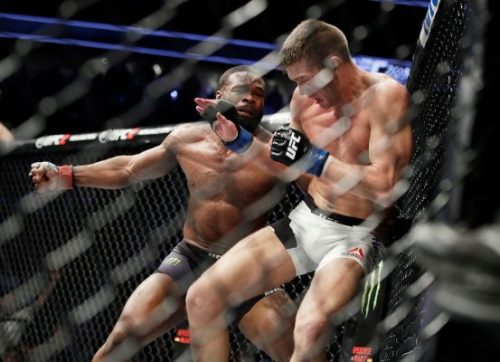 Now I, unable to understand why there are so few Woodley fans out there, did think that maybe the reason was that being simultaneously black and verbosely confident is a great way to lose fans. But, I also thought about the Frankie Edgar comparison- a challenger takes the strap in an upset win, gets no love from the fans and then fights an evenly match opponent to a draw. There are some specific parallels there. And Frankie is white. The children of Italian immigrants have been considered white since the 1960’s when other white people decided European Catholics needed to also count as white in order to maintain majority status. So, that kind of deflates my gut reaction that the Woodley hate is fueled by racism.

That line of thinking is how I reached my most interesting thing about UFC 209. Racism is not the only explanation for why a man like Woodley does not connect with the fanbase. But, it is an explanation. A plausible explanation. And, it took the current political climate for me to see how it is often the go to explanation.

Something I’ve been saying for eight years is that I never had any clue how prevalent racism was in America until we elected a black president. The start of the “fake news” and conspiracy theory craze was largely birthed from the fact that normal people were willing to believe Obama was somehow Kenyan-born. There was no real evidence of it, but the message was simple: the black guy is foreign, less American than the white guy.

I’ve seen a similar message with a lot of the anti-immigration sentiments going around the country. A great deal of meme’d “statistics” have been popping up around social media that conflates numbers of undocumented Mexican immigrants, documented Mexican immigrants and American citizens with Mexican parents as “illegals.” Again, brown equals less American than white.

Once I started seeing the stinger of racism embedded in average Americans’ political opinions, leaking poison into their rationality, I couldn’t un-see it. Every time someone has an opinion I don’t understand or they can’t explain, I have to ask myself “is racism the missing link, here?” In at least some cases, the answer is yes.

So, let’s bring that back to Woodley. There are any number of reasons why a great fighter might not connect with fans. I’ve heard some good arguments and I’m sure I’ll hear more. But, how often is the good explanation the reason and how often is it the excuse to hide the real reason? I don’t know.

Then I imagine being Woodley, who wares this creeping doubt every day as part of his skin color, rather than some purely academic realization that I had after living a privileged life. And I’m left knowing even less.

I didn’t say it would be conclusive. I just said it was interesting. 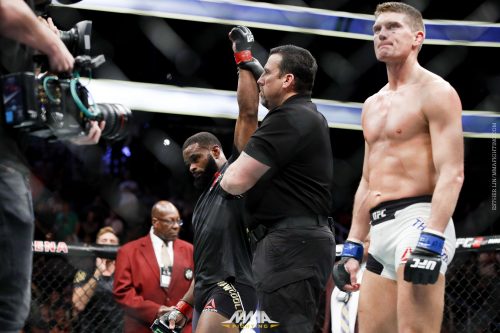 Previous articleEat Fresh-ish: Only 50% Chicken DNA in Subway’s “Oven-Roasted Chicken”
Next articleTeaching Yourself How To Suck Less