Home Features “Both sides are just as bad” – Why assholes make False Equivalence... 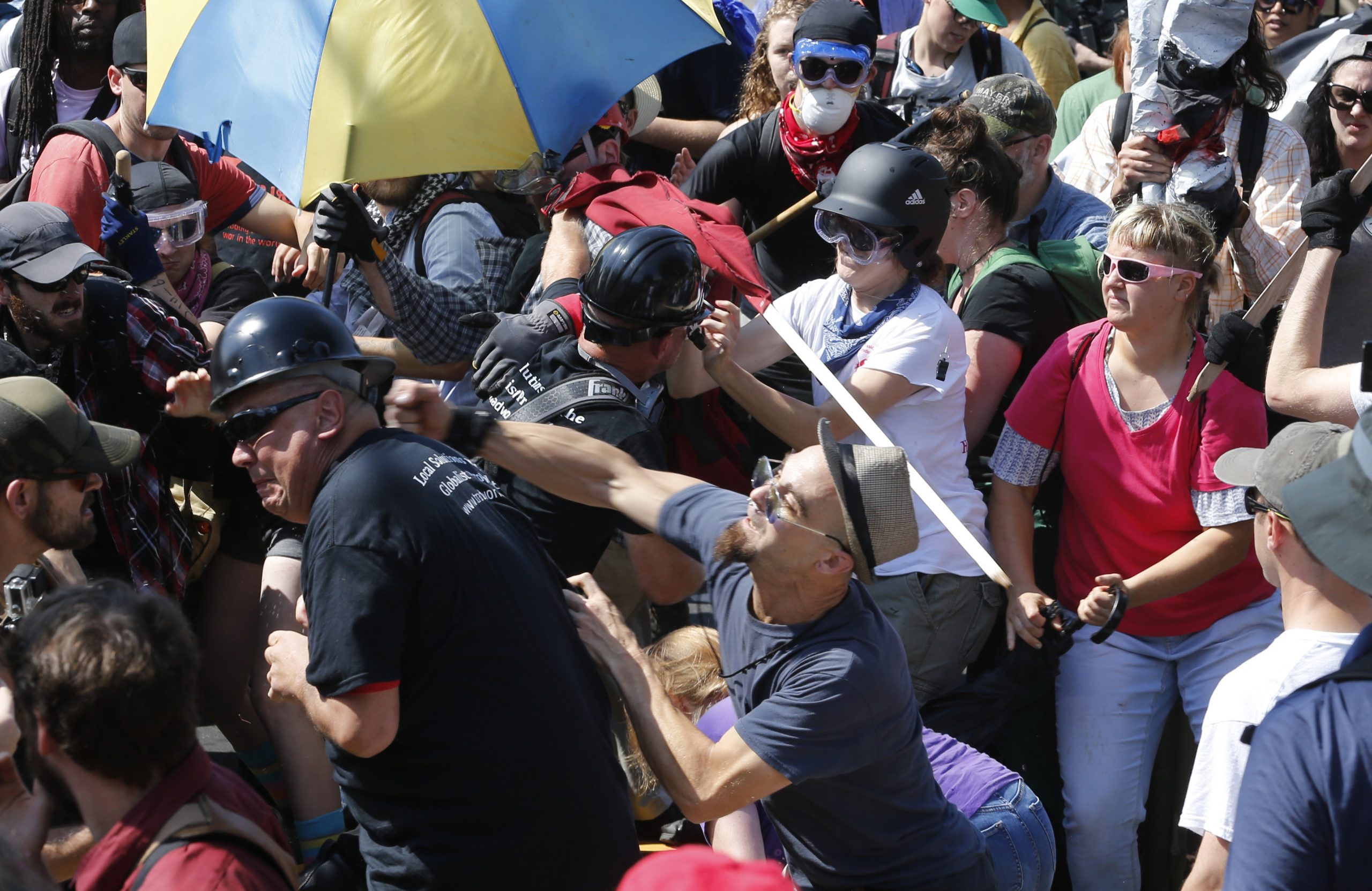 You’re in middle school and it’s been a crappy week: your parents are pissed off about you getting a B even though your siblings are basically delinquents. Your teachers have long since stopped giving a shit about their jobs. The water fountain has something yellow in it. You just want to make it to your next class because it’s between you and your weekend.

But there he comes down the hall: Chad. Every day before sixth period, Chad pulls some bullshit. Yesterday he knocked the books out of your hands. The day before, he put gum in your hair. Wednesday he tripped you. You endured it all because you know Chad’s dad beats him and his mom’s the town slut–or is it the other way around? Regardless, Chad’s built like a walrus and has the brains to match, and you’ve already figured out enough about life to know he’s going to be serving you fries in 10 years. Maybe his real problem is that he knows it too.

Still, every day you tolerate it, you ignore it; and any other day you could have. But today is the end of this awful week and you’re done with everyone’s shit; you just want to go home.

You see Chad sizing you up out of the corner of his dull, cow-like eye; the two rusty gears in his head creaking towards a plan. He glances at your feet. Okay, you think, he’s going to try that stupid trip again. You know better than to use what you learned in jiujitsu at school, you know exactly how much trouble you’d get in if you did. So you prepare yourself to just hop over his leg if he tries it. He’s still not worth getting upset about, you remind yourself. Just get through the day, go home. Maybe get some fries on the way. Picturing Chad serving them to you makes you smile.

You attempt to walk past him, ready for his nonsense, keeping most of the weight on your front foot. Here it comes.

Thud. The air goes out of your lungs and it takes a second to realize what happened. Chad slugged you right in the stomach. No trip, no shoving, no pretense of an accident; just a fist in your gut. He’s saying something to his buddies as you’re doubled over, but all you can hear is the blood pounding in your ears.

You shoot a flawless double leg takedown on the bigger kid. As you always suspected, his bulk feels like a tube of room temperature cookie dough: all size, no muscle. You drive him into the cheap carpet. There’s no skill needed to pass what should have been his guard; either he’s in shock that you retaliated, or he doesn’t even get the concept of defending from his back. In short order you settle in to a mounted position on his chest.

Chad flops around in his crude attempts to buck you off. But you’ve trained with bigger kids and even some of the smaller adults: you’re not going anywhere and neither is he. This asshole needs to learn a lesson says the primal voice of rage coming from the back of your mind. But with your fist cocked in the air, you hesitate. And that split second is all you need to come to your senses. It’s still not worth it.

“Break it up” the teacher yells, a bit more frantically than you think the situation warrants. “Both of you, principal’s office”.

One hour later–the same amount of time you had left in this crappy week if you’d been allowed to go to your last class without drama–you both leave the office with a three day detention for fighting.

The teachers didn’t care that Chad had spent all week messing with you. The principal didn’t consider Chad’s history of bullying or the dozen other times he’s done this to other people.

All they cared about was that he hit you, and you were going to hit him back.

False Equivalence works like this: A is bad. B is bad. Therefore A is just as bad as B.

The answer to the question of who uses False Equivalence arguments should be obvious: people who want to get away with being an asshole. They use it to dilute the egregiousness of their own behavior by equating it to the behavior of others, even if the others are just responding to the initial aggression in the first place. They also use the argument in an attempt to distract the spotlight from their behavior.

When neither of these are viable, they use False Equivalence to ensure the people on the receiving end of their aggression suffer at least some if not the same consequences for standing up to them: a lose-lose pyrrhic victory.

But as it is with everything else involving bullshit, it’s infinitely more critical to discuss the the people who fall for False Equivalence arguments. Because if this argument didn’t work so well, assholes wouldn’t use it.

Some people buy into the idea that any example of a certain act, regardless of the reason behind it, is bad. This is the default policy at a lot of public schools, specifically because it absolves overworked administrators and bureaucrats from having to do any actual thinking or having any responsibility for understanding the nuances of a situation.

It’s the same when this kind of thought process happens outside the schoolhouse too. In this case, it comes in the form of “never” statements, including the oft-repeated “Violence never solves anything”. The reason this is a problem is because the world isn’t a two-dimensional plane, choices aren’t binary in nature, and there are more than two colors on the visible spectrum. In other words, reality doesn’t come in black and white. It is a completely separate argument to say that hurting another person without justification is bad, than it is to say hurting anyone is bad. If someone’s actively trying to kill you, it’s generally considered okay to try to kill them back.

But just like in the schoolhouse, zero tolerance policies are really just moral, ethical, and intellectual safety blankets under which people who don’t want to confront harsh realities like to hide. And confronting the reality that sometimes the two sides of an argument are bad, and REALLY BAD, rather than good and bad, requires a few more circuits between the ears than some people seem to have been equipped with… to the detriment of everyone else.

It should be evident to anyone who reads Bullshido regularly, that a significant number of people don’t like to think very hard. It’s a lot easier to just condemn all sides in a confrontation–especially a violent one–than to educate yourself on the details, context, and motivations of the parties involved.

Once upon a time there was a four-letter nation that some might say began with both arguably good intentions and the unarguably horrific murder of the previous group of people in charge. To be completely fair though, the early 20th century had a lot of that going on.

The important part is that those good intentions never seemed to translate into good results—much the opposite: millions of people were killed or sent to work in a frozen wasteland–basically an execution with benefits, while those that were left had to contend with a state of constant surveillance to assure loyalty to the ideals of the nation and its lone political party. The country, if you haven’t already guessed, was the USSR, or Soviet Union.

Whether or not you agree with the philosophical-economic underpinnings of the system they wanted to impose, the people who founded the USSR really did so with the best of intentions. It’s just that quickly after they started–maybe even on the scale of minutes–they seemed to find out that in order to implement those good intentions they had to do a ton of really not-good things. And as the years went on, they had to do progressively less-good things to keep working towards those “good intentions”. (By the way, If there’s a political analog to the Sunk Cost fallacy, please share it in the comments below, especially for any Soviet agents equipped with time machines.)

So what do you do when you’re flat-out guilty of doing awful things, but you still believe so strongly in your cause that it doesn’t matter to you?

You point the finger at other people and say they’re just as bad.

And so we’re back at assholes.

The tactic, as it’s formally known, is “Whataboutism”, and it’s essentially False Equivalence weaponized for political propaganda. The most well-known example of this was when a Russian was asked about any of the horrific things their country had done–such as ethnic cleansing of Jews or raping hundreds of thousands of Europe’s women during World War II, or working and starving its own citizens to death, the typical response to any American asking questions would be “but you lynch negroes”.

This was used in multiple instances, to shift the topic away from atrocities, abuses, and failings of the Soviet system… to such an extent it became a cliche.

So instead of addressing the issue being asked, the Soviet spokesperson would ask “what about” some other bad situation in another country, often the United States.

“Hey now!” you say, “I know a politician in this country that uses that very tactic.”

And again, we’re back at assholes. And that’s where we’ll leave you.

BSer’s Technique of the Week: Appeal to Common Belief