There’s a lot of hostility towards women on the Internet: from unsolicited pictures of a stranger’s genitals, to outright threats of rape for any woman that speaks out against inequality. But what’s worse is that women aren’t just on the receiving end of hostility from the opposite sex; all too often they’re directing it at their own.

Mommyjacking is a form of harassment by women of all ages, directed at young women participating on social media. The term comes from having a post about a life event –from the trivial to the significant– “hijacked” by a mom who can’t seem to understand that there’s life outside of motherhood. It ranges from the clueless or passive-aggressive rudeness caused by failing to realize that children aren’t a part of everyone’s lives (and that’s okay), to ridiculous condescension and outright hostility for anyone who decides to do anything with their life other than reproducing. Here are some examples: 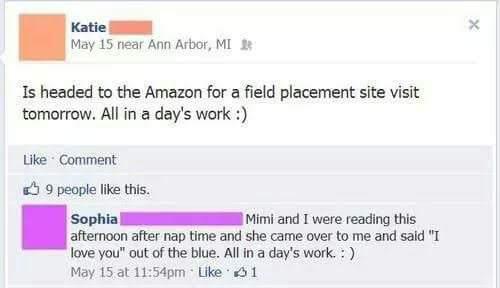 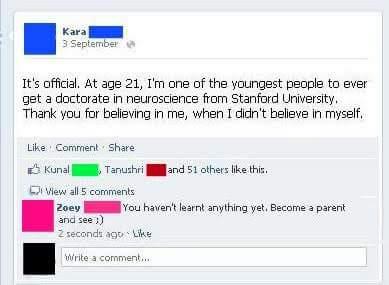 Motherhood is challenging, but it’s certainly not the most difficult job in the world. If it were, Earth wouldn’t be closing in on a population of ten billion like a freight train headed downhill, off the rails, on fire, towards a nuclear reactor.

In the former Soviet union.

And it shouldn’t need to be stated that it’s perfectly fine for women to choose not to have children, to pursue things in their lives as an independent Human being, and not simply a walking incubator.

As BS goes, we’ll admit that Mommyjacking is not exactly on the level of Fake News, Pseudoscience, Alternative Medicine, or curling in the squat rack; but it’s still a shitty thing to do. And at Bullshido, we trying to make the world a little less shitty every day.