Bullshido tends to stay away from politics, as an editorial policy. We prefer to stick to subjects that are matters of fact, and highlight the people who are twisting, omitting, or denying those facts. But when you have a political party that bases its policy on outright bullshit, we feel obliged to step in.

The American Green Party has been a sort of refuge for people who see the Democrat party as not progressive enough, or perhaps, too chummy with big money interests, corruption, or even capitalism itself. Regardless of any party or candidate’s political views –agree with them or not– they don’t get to make up their own facts.

Recently, Jill Stein, the Green Party’s candidate for President of the United States, has come under fire as being anti-vaccine; a charge that is particularly damning given that Stein is a Harvard-educated doctor. She used those very credentials to refute these claims:

As a medical doctor of course I support vaccinations. I have a problem with the FDA being controlled by drug companies.

Doubts linger given previous statements, in which she casts doubt on the overall practice of vaccinations:

The doubts on their surface seem reasonable, but muddy the waters on the issue. And that’s precisely the kind of mud in which denialists and anti-vaxxers like to wallow. But where there is a murky sense of Stein’s position on vaccines, there’s a clear sense of her position on WiFi. Yes, WiFi, the transmission of Internet via radio signals.

In a video dug up from YouTube, Stein is prompted to express irrational, anti-science views on the subject:

“What about the Wireless”, one audience member asks.

“We should not be subjecting kids’ brains to that”, Stein replies.

It should go without saying that WiFi as a threat to health is bullshit, and largely a psychological phenomenon. As the World Health Organization points out, physicians should treat it as a mental health issue.

The question is whether Stein genuinely believes that WiFi is dangerous, or is catering to the fringe views of her supporters. Neither of the two choices puts Stein in a good light, regardless of her political beliefs.

We feel obligated to mention that the current Republican candidate for President has expressed even more poorly-informed views on vaccines, and there’s little grey area on his position; or at least his position at the time: 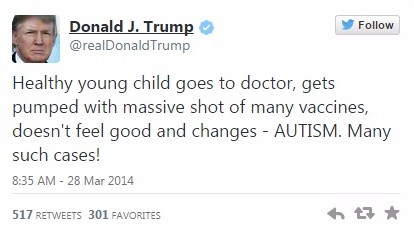 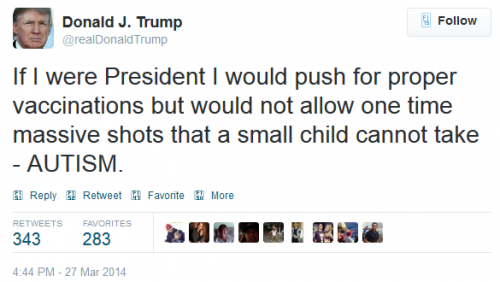 Again, to reiterate, Bullshido is not endorsing any candidate in this election and does not comment directly on politics, except when politicians get Science wrong, or spread BS; in which case, we’ll point it out regardless of their party or political beliefs.

Ever dream about just saying "F it" and going to train an obscure martial art in a foreign country? Alyxe Khei did, and then lived that dream. He joins us on this episode of The Art of Fighting BS podcast to discuss tips and advice for people who want to visit exotic places and get punched by the people who live there, and we delve into the real history of Martial Arts and how ethno-nationalism looms over virtually every one of them.
Facebook
Instagram
RSS
Twitter