Frames – Not Just For Pretty Pictures.

Over the years, I’ve changed my game drastically. I used to love passing loose, and use my athletic ability to pass guard, go for subs, attempt to hang with the young-ins. Well as much as a 250+ man can anyways. Those days are long gone. When I’m on the mats, nothing hurts, now I’m at home, and life sucks. Almost three hours on the mats today, training, drilling and teaching. Like you, life stops on the mats, and it’s only Jiu Jitsu, in the moment.

So what’s changed? Frames. Everywhere. Frames were there before, but it took time on the mats, experience, and pain to take notice of them, and their power. When you’re a white, you’re all about GO GO GO! Pass that guard, fuck technique, get around that leg, get the head and crush. Somewhat less at blue, but I remember rolling with a brown that for the life of me, not crush, not get a limb, and would escape and put me back in guard with ease. And it was all frames. The realization that when you are defending you want space, and when you are attacking you want no space using pressure, and that frames are the key to defending. Ryan Hall has a great breakdown on guard defense, first, second, third and how you intermingle the legs, arms, elbows, into different frames to either go secondary back to primary (Guard), to sweep and attack. If you get a chance to watch his DVD, I’d highly recommend it.

But that wasn’t my first experience with learning frames. As a new blue, I bought Roy Harris “BJJ OVER 40” DVD. Basic info compared to what is out there now, but it was a game changer for me. As with all of us, we’re voracious in our search for knowledge, and piecing it all together. Keenan Cornelius once said they trained for transitions, to expect the moves coming and be prepared for it. All about the frames, baby. The frames.

Where to begin? Let’s talk about the guys at BJJ Curriculum. Coach Doug from Vanguard Gym is a fantastic instructor. He filmed a 45 minute video that will push you to the next level as a grappler. I learned a few new tricks and got reacquainted with technique I’ve lost. When I say you need to watch this, I mean it. You will never worry about your guard being passed and being stuck under side control, ever again.

I know I’ve lost you for the whole video. It’s cool, it’s fantastic and full of information. Who likes getting stuck under side control? Not me, and I know not you. That’s only part of the equation, half guard is another position that frames shine. And that leads me to my next video for you to watch. Cane Prevost from Straight Blast Gym, where the “Stoned Squirrel” originated from, is a fantastic teacher. Simple technique, can be done by anyone, and again, will erase any apprehension you have going against a bigger, stronger, younger training partner.

Half Guard Bottom “A” Game

In short, as I get older, I’m not looking to be Mundial Champion. I’m looking to survive. One of my best friends, Dave Novigrod, one of Rigan Machado’s earliest American Black Belts told me once when I was a blue was, don’t worry about tapping someone. Work on not getting tapped, your defense is what matters. Once you can defend, you can attack. Of course this was after the first time we sparred and he dragged me through the garden of pain. I threw up twice that day. Old school BJJ Black Belts and their fucking pressure. 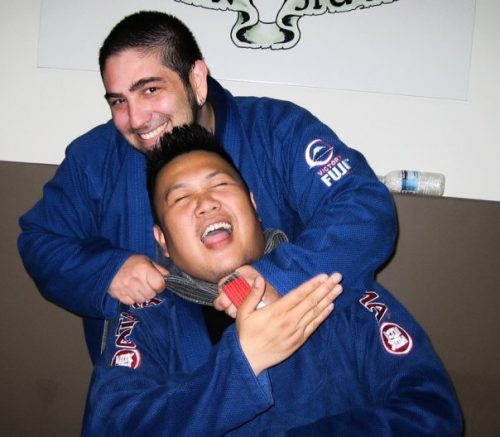 Give me feedback. Let me know your thoughts. Till next week Homies.