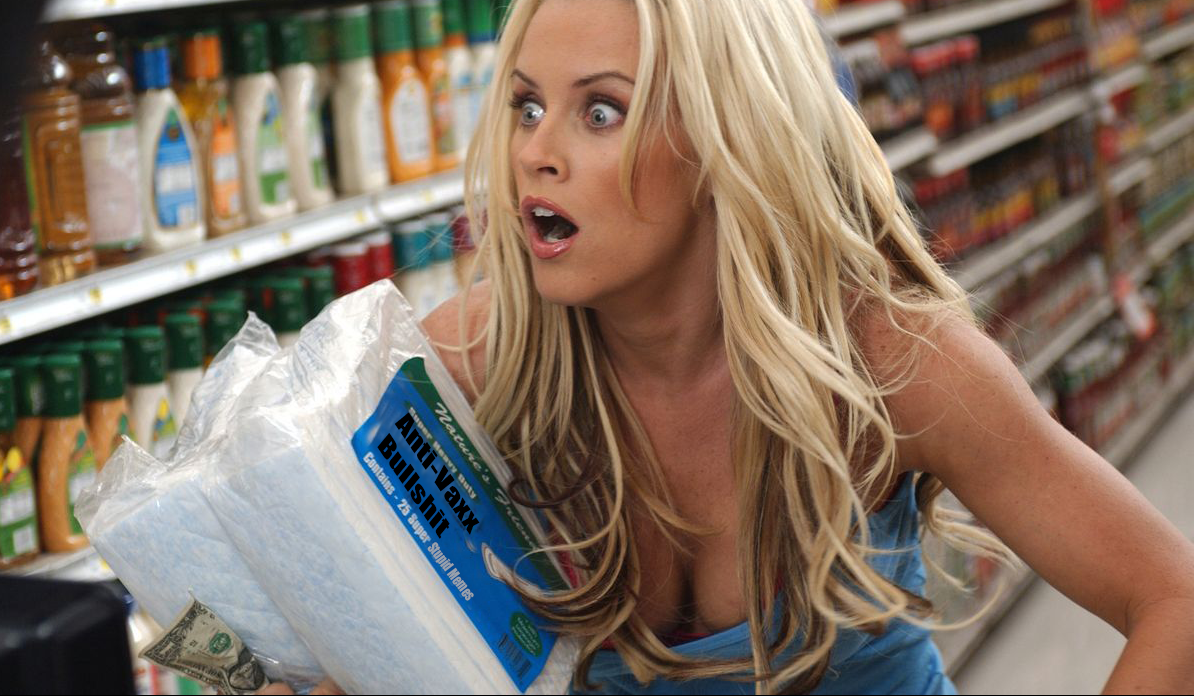 My sister in law ran into the magic of anti-vaxxers on social media this evening, and I was so blown away by the thread that I had to write an article about it. Maybe if it wasn’t for the fact that last week some ding dong on Fox News joked about never washing his hands because germs aren’t real, I might have let it go.

Now before I begin this, I should preface this by saying, my sister freely admitted that she does not like calling anyone an asshole…

I’m sorry but, I don’t buy into society’s views that offending people is the worst thing that can happen. There are some people that I wish to offend. Anti-vaxxers are one of the core demographics that I would like to offend at any given turn. If I could enact a worldwide policy that included flipping off anti-vaxxers every time folks got on and off the freeway, I would never leave the road and have a repetitive stress injury in my forearm and middle finger.

The names have been removed, but the quotes were made on a public social media page, so, oops, their bad.

The conflict centered around my sister sharing an article about an anti-vaxxer’s child whom, for their 18th birthday, decided to go out and get vaccinated. Link to the article is here: Teen with ‘anti-vax mom’ celebrates 18th birthday by getting vaccinated

The very first post was an anti-vaxxer with the well crafted and highly evidenced comment of, “Fake news.”

Folks disagreed, and then this person added,
“I have seen in several places that it was staged. It’s a huge stunt to put him in the spotlight. Furthermore, most fake news isn’t easily uncover-able. Example: this measles “outbreak” is a huge pharma scam. The news hasn’t been able to successfully find one family to interview. It’s part of the bill agenda to take away exemptions. The CDC site hasn’t recognized the “outbreak” at all. It’s a media hoax. The media is owned by pharma in case you aren’t aware of that.”

Extra hyphens in words like uncoverable make my eye twitch, but the use of quotation marks here really supports their point. This person is “well educated” and “quite informed” on “vaccinations” and “logic.” Also, she is right on the money about all of the media being owned by pharma since PBS stands for Pharma Bros Stealing. I managed to find a page of the CDC “not” recognizing measles outbreaks here: CDC: – Measles Cases and Outbreaks

Then a second anti-vaxxer appeared like a Pokemon battle and dropped this gem, (please when you read the word Rockefeller here pronounce it in your head as “Rock-E-” I don’t know why it just makes this funnier):
“I’m with (first anti-vaxxer’s name). Most people follow the media blindly and we have been taught to do so… “how could our government/media ever lie to us”. Like mentioned above “I even saw it on the news”

The problem is that it is an agenda that is so hidden the people who are questioning it look like crazy people. 6 corporations control over 90% of the media. These corporations are owned by the richest families like the Rockefeller’s… Who (Rockefeller) founded pharma. This destroyed naturalist it’s also intended for their goal of the new world order (but I’m sure I sound crazy to you at this point). Cancer is a profit… vaccine injury is a profit…. and the list goes on. The deeper you dive down the rabbit hole you start to put the puzzle pieces together to find as much of the truth that’s been leaked…. if this is a true story (I doubt it is) good for him but there’s a bigger goal here and if you sift through the bullshit you will find it! It’s much easier to choose the blue pill rather than the red… it was a much simpler time before I chose the red pill…”

Wow, there is so much to unpack here but “sifting through the bullshit” is what Bullshido does well. Also, I need a moment to marvel at this dramatic, Shatner-level use of the ellipses… Okay, I’m good.

John D Rockefeller was an oil baron who made his money in oil and natural gas but, he apparently founded pharma? I couldn’t find a mention of this in A history of the pharmaceutical industry – Pharmaphorum

Also, I find it highly suspect that someone opposed to big pharma uses the terms red pill and blue pill instead of red crystal and blue crystal but, whatever.

At this point, my sister questioned the “fake news” claim and the over the top use of quotation marks which made me proud.

Unfortunately, the second anti-vaxxer continued,
“no arguing needed… everyone is entitled to their views
plus I also “think” it’s fake news… think being the operative word here… meaning I’m not sure it’s fake or it’s real either just my thoughts on the matter… also my comment wasn’t intended to start an argument with anyone… just the research I’ve done and what I’ve concluded”

Yes, yes, you are certainly entitled. No one is arguing your entitlement here. I’m sure you’ve done a lot of “research” on the “subject.”

Sure, I’m being petty here, but can I cite fact with folks like this and get my point across? No, I don’t think so, and the proof of this is found in this fantastic meme that the anti-vaxxers shared:

There it is. All the facts you need. Large Serif fonts, telling you, “STAGED” followed by red 3-dimensional letters announcing “Fake news.” How could we have been so wrong?

You know, maybe the problem isn’t that these folks buy into pseudoscience, perhaps they only speak in memes. Perhaps we have to get down to their level to get our points across.

I made the following memes with the Kapwing Meme generator website. It costs money to remove the watermark, and I’m a writer that owns a comic shop and is a disabled combat veteran. This is like saying, “I’m poor, I’m poor, I’m poor” all in the same breath. I can’t afford the six bucks. Hopefully, Phrost puts the Bullshido logo over that silly watermark, but I am not a photoshop ninja.

By the end of these shenanigans, I tagged Phrost in the thread just to ask if I could write an article as a response because I’m petty. I am so petty. It is a dark and vindictive curse that rides high inside of my skull alongside my other old friends: sarcasm, cynicism, and depression. I’d be lost without them.

But my point stands: Anti-Vaxxers are a hideous failing of the digital age. They are playing a cruel form of back-alley gambling with the lives of the elderly, children, folks allergic to inoculation and the human species as a whole.

I feel that terrorism is the worst thing to come out of the 20th and 21st century. Folks killing innocent people to further their agenda is just disgusting, and by this definition, anti-vaxxers are no different. There just isn’t enough of us “assholes” calling them terrorists for the innocent lives that their ignorance infects, and kills.

So in conclusion, if you’re a die-hard anti- conspiracy dingdong dipshit, feel free to let Fox News hosts stick their unwashed hands in your mouth.