It’s 9:53pm on a Wednesday. I finished Jiu Jitsu around 8:30, sat out the last hour, tired. But I sparred today. First time in almost two years. I didn’t last the whole round, five minutes out of six. Lack of rolling and medicine did me in attempting to yank a Kimura from top control, holding my breath. But that’s today, and not where the story begins.

I started BJJ about the same time I joined Bullshido. I was in my early 30’s, was one of the 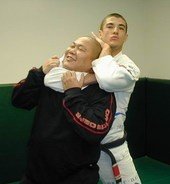 Webmasters for the Gracie Academy in Torrance. I did privates with Rener, trained with Ryron and Ralek, even with Rorion himself a few times and Grandmaster Helio. I was 280lbs back then, thought I was a bad ass, how little did I know that I was far from it.  Nothing opens your eyes than being dominated.  My first roll was a 6 month White Belt, “Omar”.  He tapped me out every 30 seconds.  He was 140lbs. I was hooked. 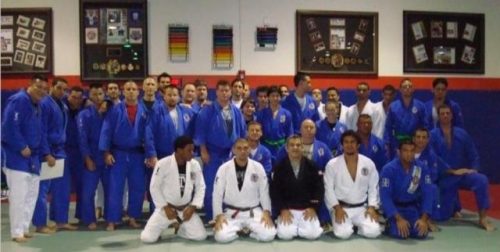 At my core, I’m a Nomad. I like to move every five years or so, give or take a year. I found myself living three miles away from American Top Team in Coconut Creek.  And the world of Jiu Jitsu and MMA opened up for me. Training under Ricardo Liborio, I learned things as a white belt I thought were forbidden. But nothing was with Libo, heel hooks in gi? Sure no problem. Moving over from the Gracie mindset to the more aggressive Carlson Gracie lineage was an eye opener. Pressure passing, athleticism, the little tweaks that make Jiu Jitsu more effective, things we thought were “Secret Techniques”, under Ricardo Liborio were taught freely to make us better Lutadores.

During this time I was taking privates under Renato Tavares, he was taking a trip to Brazil, and introduced me to my current BJJ Coach, Emyr “Shark” Bussade. When you take a year’s worth of private instruction you create a bond. He’s my Brother, my family, and all the pieces and parts that go with it. We laugh, we fight with each other, get angry, but we always come back to family. Shark awarded me my Blue, with my MMA Coach Danillo “Indio” Villeforte. Shark also awarded me my Purple Belt in 2015.  Great memories at Coconut Creek. 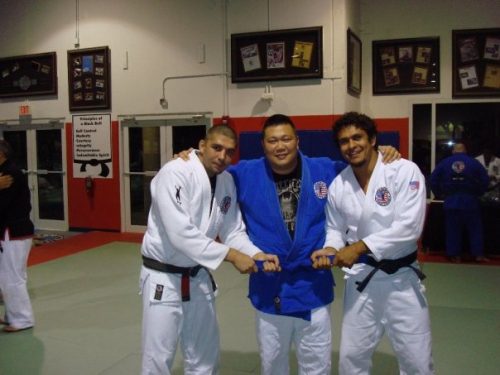 Fast forward ten years, I’ve moved, two or three times, trained at some great Gyms, “Academy of Brazilian Jiu Jitsu” in Chatsworth, “4SBJJ”, “Primal BJJ” both in San Diego, I tried to keep training, but life gets in the way. I partially tore my Labrum in my right shoulder, have terrible lower back issues, and shoulders pop out when I roll. But when I can, I go back to BJJ. I was a Blue Belt for 7 years. Shark used to joke, you’ll die a Blue Belt. Which to this day he keeps telling me he wished he never said that and feels guilty.

Three years ago I had a Heart Attack. On the mats, riding in back control of my partner about to slap on a Rear Naked Choke. I want to say I was scared when it was happening, but really I was calm. Other than I couldn’t catch my breath, being nauseous, dizzy, and music playing was starting to sound funny. Every time I opened up my eyes, it was tunnel vision. All I kept thinking of were my kids, both in College. And if I did enough to give them the tools to thrive. I found what I loved, and let it kill me. Almost. Heart blockage was cleared and a stent put in, and I thought I’d be 100%. Silly me. The medicine I’m on severely limits my cardio and energy. It takes months and months to be able to roll rounds again, building myself up. And one of the reasons why I took almost two years off after receiving my Purple Belt. In hindsight it was the wrong thing to do.

So here we are now, I’m almost Fifty years old.  I’m 215lbs, lightest I’ve ever been in decades.   Everything hurts, knees, elbows, shoulders, back, but it’s not a debilitating pain, more you lived a full life and shit wears out type of pain. And that’s what this blog is going to be about. Grappling, living with the highs and lows of BJJ, and getting fucking old. What I have had to change in my game to use less energy, drilling a slower more deliberate game. Rather the flashy new modern game like my Son plays and other early twenties competitors. That’s the other high I want to mention. My Son made Blue in ten months, then won his first Gold medal as a Blue at the IBJJF Miami Open. He tore through the circuit. Nothing made me more proud than seeing him competing and winning. At the end of the day, we all want to leave a mark on this world before we end our days. That’s what Jiu Jitsu has done for me. Jiu Jitsu is life.  This is the continuation of my journey. 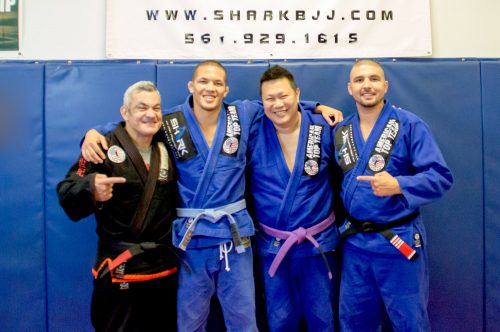