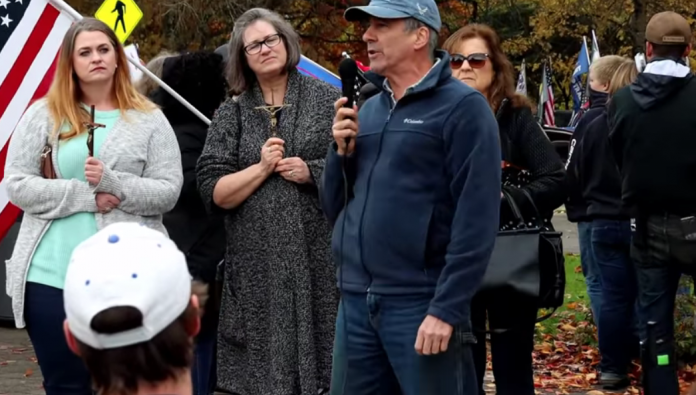 “I want to expose what I call ‘Corona-mania'” LaTulippe said at the “Stop the Steal” rally of November 7th. He went on to say that the Coronavirus was “rapidly-mutating”.

This is, in fact, exact opposite of what SARS-CoV2 researchers have concluded. Indeed, compared to other single-strand RNA viruses, the relatively slow mutation rate of the virus responsible for Covid-19 has been a boon to vaccine researchers, reducing the amount of effort needed to address variants.

LaTulippe listed as his credentials his service in the Air Force and his status as a Christian minister, before transitioning directly into a confession that he and his staff refused to wear masks in his clinic, which was met with applause by the audience.

The now-former Oregon physician “petitioned” the crowd to “take off the mask of shame” before making wild claims that the public health measures were designed to undermine the Constitution and more ridiculously, conflating the “diameters” of the virus with the particle filtration of the N95 mask, which disingenuously omits the fact that masks are for preventing the spread of respiratory droplets in which the virus is contained.

This is a common argument among denialists and downplayers, taking advantage of the general public’s lack of understanding on how public health mitigation practices are implemented, and poor scientific literacy in general. Many often key in on a single solution’s inability to completely prevent infection, while either being ignorant of or deliberately omitting the fact that each is a part of a broader comprehensive strategy to reduce, not completely eliminate risk.

The State of Oregon Takes Action

In response to being made aware of the video, an investigation was conducted. On December 3, the Oregon Medical Board issued an emergency suspension, finding that LaTulippe “engaged in unprofessional conduct or dishonorable conduct” for informing patients not to wear masks and not to self-isolate based on the idea that others should be infected to obtain herd immunity. Furthermore, the investigation determined that indeed his office did not require masks, did not screen patients for symptoms, and did not even offer hand sanitizer.